Sea, diving in the pool and tours in the Tuscan countryside are not enough for you? For your holiday in Tuscany, do you want to organise a romantic wellness weekend in a spa or a wellness centre?

Then you have come to the right place! Tuscany, in fact, is full of spas and many of these are located a stone's throw from thePark Albatros!

The tradition of thermal baths in Tuscany

Thermal baths in Tuscany have a very long tradition, dating back to the Etruscans, the first to appreciate the beneficial properties of thermal springs. Thanks to the wealth of natural basins, Tuscany boasts a wide choice of establishments and is ranked among the best destinations for an afternoon of relaxation and wellness in the warm pools.

The importance of the thermal waters in this region is demonstrated by the legends surrounding this local resource.

Among the many, that of the god Saturn who vented his anger with humans, because of the continual wars, by throwing a thunderbolt down to the Earth, creating a large crater from which began to gush hot water and steam: the Terme di Saturnia.

In general, thanks to their ability to facilitate the recovery from illnesses, thermal waters have always been considered something divine, with magical powers and mysterious properties!

As in the past, also today, thermal baths are very popular with everyone: couples looking for a relaxing and romantic experience, groups of friends looking for a different way to spend a weekend and also those who love taking care of themselves using natural methods.

In fact, thermal pools today as in the past, play an important role also in the medical field: for skin care, for respiratory problems and also to unwind from the stress of everyday life!

The most beautiful thermal baths of Tuscany

It's time to review the best thermal baths in Tuscany and let your cares "immerse themselves" in the warm therapeutic waters! 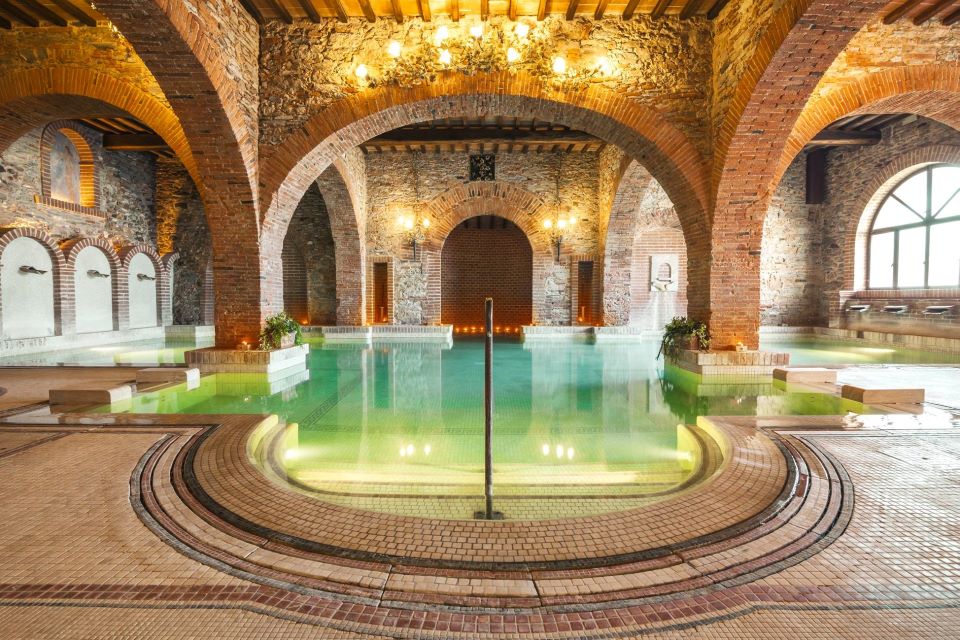 Just 5 kilometres from the wonderful sea of the Etruscan Coast and 10 minutes’ drive from Park Albatros, there is an ancient spring, with a temperature of 36 degrees centigrade, immersed in the greenery of the surrounding pine forest: the Calidario Etruscan Thermal Baths.

The establishment also offers a modern wellness path, with a sauna, Turkish bath and hydro-massage pools: the Thermarium, an authentic Spa in Tuscany.

The Calidario is located in Via di Caldana 6, in Venturina Terme, Campiglia Marittima and is open most of the year, from March to December.

Admission costs from €10 to €35 depending on the services included and there are also various other packages, such as the "Bubbles in the spring" or the "Special day Spa".

P.S. If you go in July or August, do not miss out on bathing under the stars! 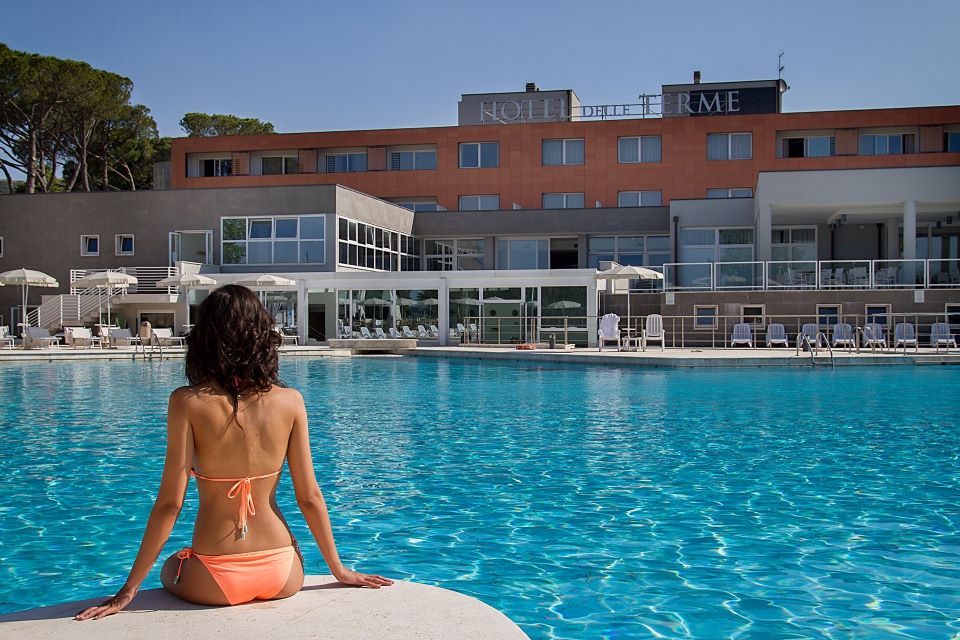 In the same area the thermal baths of Venturina, whose waters are rich in sulphur and calcium, share the same spring as the previous Etruscan thermal baths, the "Calidario" spring.

The centre has two different pools: a very large outdoor pool to enjoy open air bathing and another smaller one inside the structure. Both, however, draw their water from local natural springs, including a very hot and abundant one called "Crater".

The Venturina thermal baths have also earned the name of the temple of health, thanks to the treatments offered in agreement with the National Health Service and to the wellness packages for the aesthetics of the body.
Jacuzzi, mud or treatments or therapeutic massages: what inspires you the most?

You can find them in Viale delle terme, 36/40 in Venturina Terme. They are open from May to November, excluding Sundays, with prices around 10€. 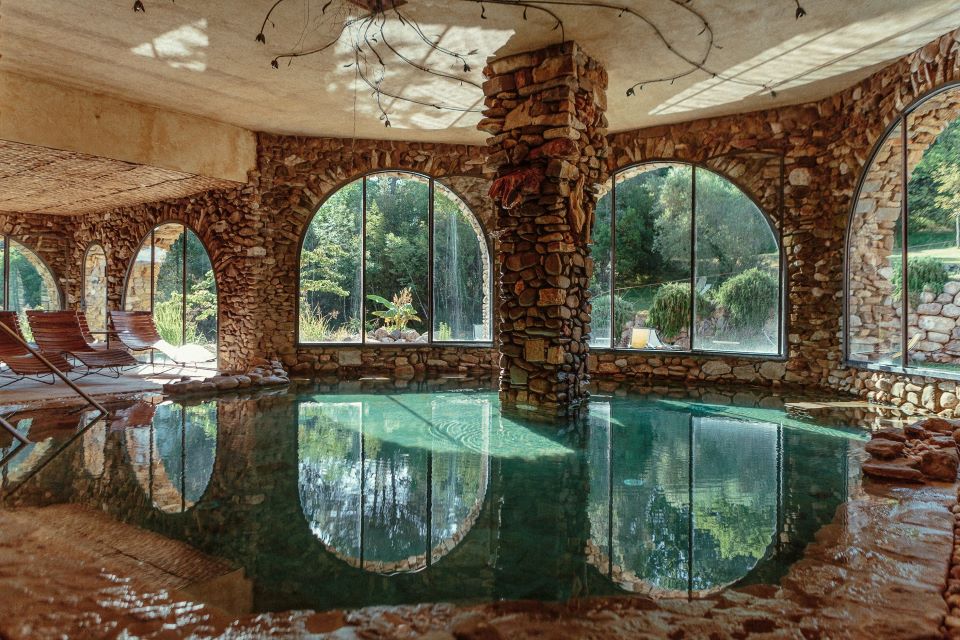 This is the third stop on our itinerary: the Sassetta thermal baths, a general wellness path for an immersive experience at a temperature of 51 degrees!

The architecture of the centre, inspired by the ancient Etruscan and Roman baths, is surrounded by an enchanting forest of chestnut and oak trees.

In addition to indoor and outdoor pools with Jacuzzis and waterfalls, the "Salus per Aquam" thermal path offers many other new features:

And in terms of aesthetics? Purifying masks, moisturising or anti-age facial treatments and regenerating body peeling.

All this is possible from February to August, with entrances to the "Salus per Aquam" ranging from €35 to € 50 depending on the days and season.

The Sassetta thermal baths are located in Via della Cerreta, 7 in Sassetta, in the province of Livorno, just over half an hour's drive from Park Albatros.

P.S. remember to book in advance! 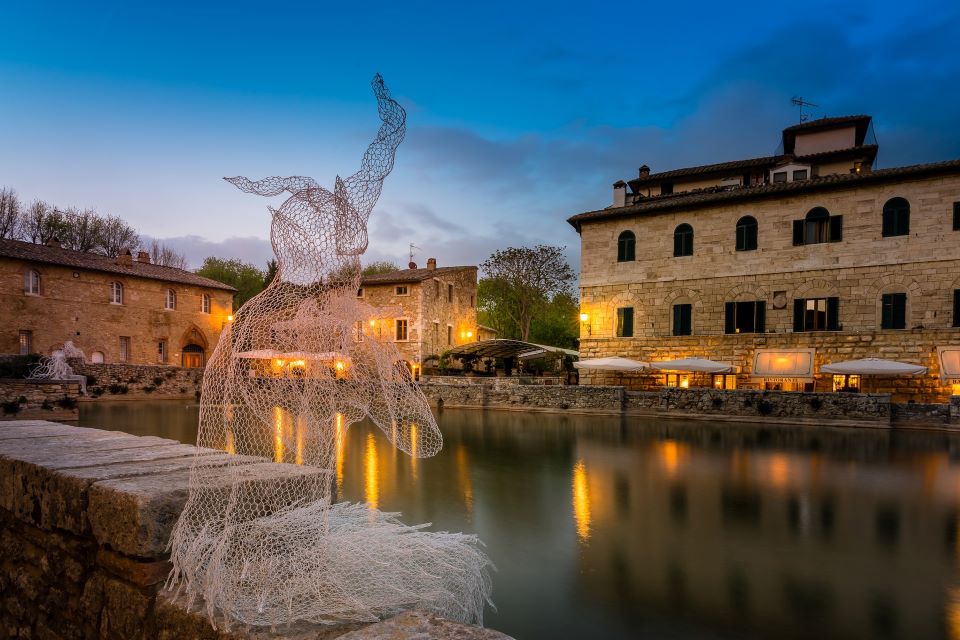 If you want to drive a little further, I suggest you reach the most famous spa resort in the area: Bagno Vignoni, in the province of Siena.

Once again, these springs, the hottest in Tuscany at 52 degrees Celsius, date back to ancient times and boast having welcomed illustrious guests such as Pope Pius II and Lorenzo the Magnificent!

The most fascinating feature of Bagno Vignoni is its central square: the Piazza delle Sorgenti, a thermal pool in the middle of the town!

In this unusual hamlet there are clearly plenty pf spas, wellness centres and luxury hotels.

But what about the Free Baths? The thermal waters that fill the large pool in the main square, flow through a web of small channels up to an expanse of turquoise coloured water beyond the Parco dei Mulini, which has lower temperatures, suitable for those who love lukewarm water or suffer from low pressure.

The trip up to Bagno Vignoni is a couple of hours drive from Park Albatros, but thanks to the natural charm of the resort, you won't regret it! 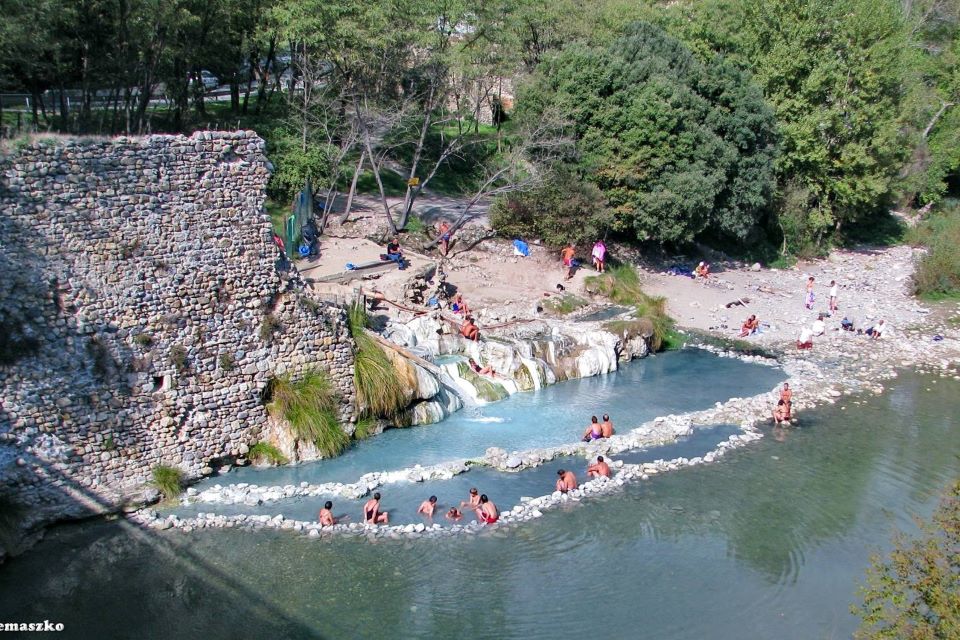 Remaining in the area of Siena, you can see another fascinating and free place: Petriolo, whose thermal baths are perhaps the most famous in Tuscany.

The natural limestone pools are surrounded by uncontaminated nature, thriving woods and streams that portray a scenario that has remained unchanged thanks to lack of human activity. The characteristic cobblestone wall, not only separates the main pool from the smaller ones, but also keeps the thermal waters temperature high, away from the cold river Farma.

The Petriolo thermal baths are classified as hyperthermal ones thanks to their 43 degrees and the high concentration of hydrogen sulphide, calcium and fluorine. A fantastic mix for treating skin problems and breathing difficulties. Or simply for a little relaxation in the splendid natural surroundings!

P.S. because of its fame, the free thermal baths of Petriolo are assailed by dozens of visitors a day in the tourist season, so we recommend you get there early!

You can reach Petriolo in an hour and a half by car from the Village.

Do you now feel like taking a dip in the warm waters of the Tuscan thermal pools? Start planning your holiday at Park Albatrosright now.

Our holiday camp is located in an area surrounded by some of the most important archaeological sites in Tuscany, and just a stone’s throw from the crystal-clear sea...